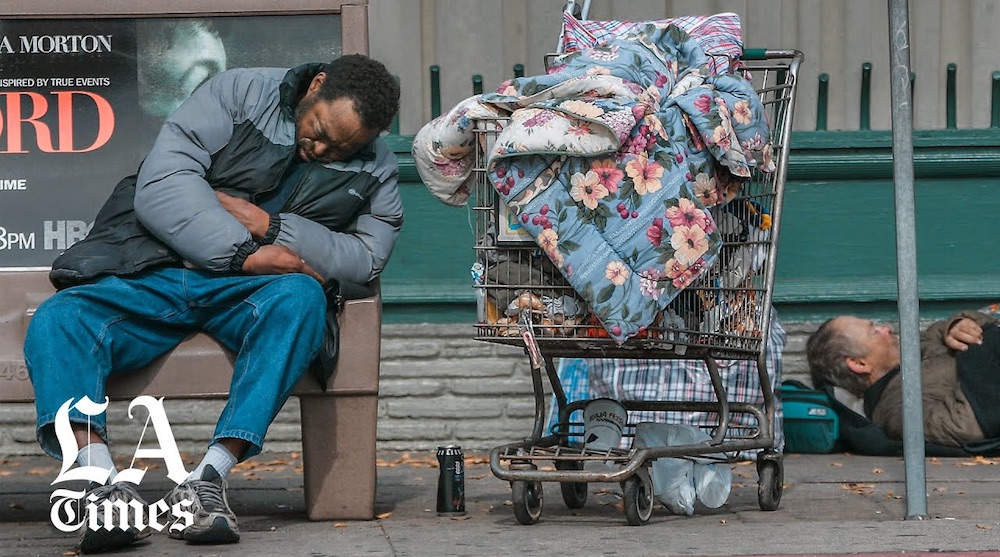 As people living in tents, RVs and makeshift shelters become a fact of life in neighborhoods far and wide, homelessness is now an all-consuming issue in Los Angeles County, with 95% of voters calling it a serious or very serious problem, according to a new poll conducted for the Los Angeles Times and the Los Angeles Business Council Institute.

The near-unanimous opinion that homelessness ranks as a top concern marks a sharp change from earlier surveys of Los Angeles voters over the past dozen years, said Fred Yang of Hart Research, the Washington, D.C., polling firm that conducted the survey.

Only traffic congestion and housing affordability — at 88% and 85%, respectively — came close to rivaling the near universal concern over homelessness.

“It’s all over L.A.,” said Justine Marine, a student who participated in a focus group tied to the countywide poll. “You can be in a good neighborhood, and it could be right around the corner. You can’t escape it.”

Respondents were, at various times, angry, frustrated and overwhelmed by the growing homelessness crisis.

The poll of 901 registered voters found widespread empathy for homeless people. It also revealed conflicting opinions on what should be done about those who sleep on the streets and about what government’s role should be at taxpayers’ expense.

In response to another question, 90% said they agreed that mental illness and substance abuse are among the underlying causes of homelessness and that government should expand treatment facilities to help. Just 6% disagreed with that view.

Three-quarters of L.A. County voters support adopting a law, similar to one in New York and some other states, that would require the government to “provide temporary shelter to any homeless person who wishes to come indoors.”

Roughly a third say they have experienced homelessness or housing insecurity, or know someone who has. That rises to 54% among black respondents, who are disproportionately represented in the county’s homeless population.
Andrea Kidd, another participant in the focus group, described meeting a man in her Bible study class who is homeless. Like several others in the 12-member group, she said she felt a great deal of empathy for people she sees who appear to be homeless.

“We’re all one circumstance away from being there,” Kidd said.

Ten other participants agreed with this sentiment. Their responses added a deeper sense of the attitudes revealed by the survey data, showing that, for Angelenos, homelessness isn’t something that’s an abstract concept. Residents are experiencing it personally.

“People are living with this on a daily basis,” said veteran pollster Peter Hart, who conducted the focus group. “It’s very direct and very personal. It’s not like crime, where people say it happened in this neighborhood or in this other part of town.”

One member of the focus group said her father was homeless. Another said he had a friend who was living in an RV. Another knew a professor who lost his job, had a bad divorce and now lives in a car.

The poll showed broad agreement that societal problems — especially a lack of affordable housing and mental health resources — play a major role in causing homelessness. But the survey also showed that the public’s empathy has limits.

Some 60% of Los Angeles County voters disagreed with the idea that people should have a right to sleep or live on public property as long as the region lacks enough housing or shelters to house everyone. Forty-one percent said they disagreed “strongly.”

However, the courts have upheld the rights of homeless people in recent years, saying that cities cannot ban sleeping in public unless they provide enough beds for those who want them. The city of L.A. has agreed to do the same in legal settlements following several lawsuits.

White respondents older than 50 and those who do not have college degrees were significantly more likely than nonwhite voters and those with a college education to say society has gone too far in protecting homeless people. Those who expressed that view were also more likely to feel that homelessness was “primarily” a result of individuals’ own choices, not of broader problems in society.

The poll also found a willingness among residents to continue taxing themselves to pay for efforts to solve the problem with new shelters, services and housing.

But respondents also were frustrated with the lack of results from the hundreds of millions of dollars that the city and county have already put into addressing homelessness. Sixty-six percent of respondents said the money that the city and county had received from the Proposition HHH bond measure and the Measure H sales tax increase, respectively, had been spent “ineffectively.”

“People don’t believe it goes fast enough, and I love hearing that because I agree with it,” Mayor Eric Garcetti said. “With H and HHH, I think what people are really saying is not whether they’ve been spent well — I know, that’s what the question is — but why isn’t homelessness gone?”

“The frustration that people are experiencing now, the angst that is being articulated with regularity here, there and everywhere, would be more profound in L.A. County had it not been for the resources and Measure H,” said Ridley-Thomas, who is co-chairman of Gov. Gavin Newsom’s state task force on homelessness. “And what I like about what I did see … is that people feel like government needs to be pushed to do more. I fully agree with that.”

The poll revealed a lack of consensus about which level of government — local, state or federal — has the main responsibility for solving the problem of homelessness. Roughly 3 in 10 respondents put the responsibility on either state or local officials while 2 in 10 cited Washington. Others pointed to regional officials or said they were not sure.

A hot housing market and a lack of affordable housing have put intense pressure on Angelenos trying to make ends meet. At the same time, the city and county have struggled to keep up with the tide of people flowing to the streets, while also struggling to speed the construction of shelters and provide other services.

Of respondents to the poll, 6% said they had been homeless or housing insecure, and 27% said they knew someone who had been. Twenty-eight percent said homelessness affected them directly. The same percentage said it affected them indirectly, while 43% said it was a problem in the region, but didn’t affect them personally.

As the homelessness crisis has worsened, encampments have become more visible, popping up far beyond skid row.

“It’s down the street from my house, the tent cities and the mess that they leave and the drug use,” said Tim Russell, a focus group member who works as a painter.

Three in 10 respondents said they feel sorry for those they see on the street, while 25% said they either think most homeless people have problems with drugs or worry about the mental health of those they encounter.

Seventy-six percent of respondents said homelessness should be treated like a natural disaster, but only 25% said they would support going beyond the current level of tax money devoted to addressing it.

Favrile Cohen, a hairdresser and lifelong L.A. resident, said that she sees the effects of mental illness and drugs playing out on the streets.

Although homelessness has been a problem in Los Angeles for decades, the level of public concern has clearly increased. In early 2005, for example, as the mayoral primary that year heated up, The Times twice polled likely voters in the city. In both instances, voters were asked what should be at the top of the next mayor’s priority list, and homelessness barely made the list — far behind education, crime, traffic congestion and other issues.

In one poll, just 2% of likely voters said homelessness should be a top priority. In another, 7% said as much.

When taking stock of the public response, 36% of those surveyed in the new Times poll were generally optimistic that Los Angeles could address the problem of street homelessness, while 41% doubted it.

“I’m as outraged, I’m as heartbroken when I drive the streets and when I see it as well,” Garcetti said. “I wear that hat first before I put on a mayor’s hat. I’m a father. I’m a resident. … I see stuff. I’m not moving around in some bubble.” 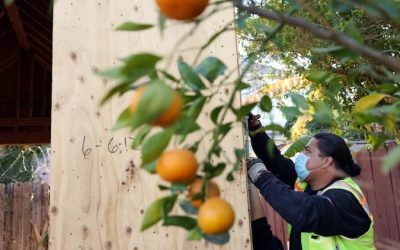