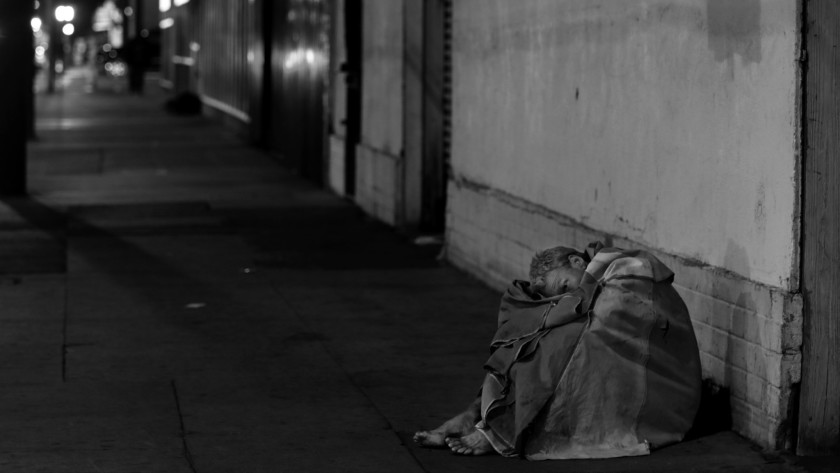 Los Angeles Times — As homelessness has exploded in Los Angeles in recent years, taxpayers have been willing to spend hundreds of millions of dollars on housing, shelters and services to help get people off the streets.

But a new poll shows that a broad majority of voters think the city and county have been ineffective in spending that money and that new policies are needed to address a crisis that they now equate with a natural disaster.

The poll, conducted for the Los Angeles Times and the Los Angeles Business Council Institute of 901 voters registered countywide, found that Angelenos are generally frustrated and impatient with the government’s response to homelessness.

When asked what should be done — without consideration to cost — respondents strongly supported a grab bag of strategies, most of which are already being considered or implemented to some extent.

But support was weaker for approving the additional funding that carrying out or expanding those strategies would require. Sixty-six percent said they thought money raised from Proposition HHH, a bond measure approved in the city in 2016, and from Measure H, a tax increase passed countywide in 2017, has not been spent effectively.

Matt Marfoglia, a participant in a focus group conducted in conjunction with the poll, summed up the widespread dissatisfaction with the slow pace.

“There’s funds there to do these very things,” the restaurant worker said. “And it has not been done. And the red tape. They’re like, ‘Well, it just takes time.’ But I mean, the solution is there and yet they’re part of the problem.”

Despite that negative sentiment, 58% of poll respondents said funding should be renewed when Measure H and Proposition HHH expire. Only 25% thought the programs should be expanded with more money.

L.A. Mayor Eric Garcetti said that he understands the criticism but that results are coming in 2020 when hundreds of new housing units will open.

Ambivalence also was evident in respondents’ views on development issues. While 68% thought that allowing higher-density, mixed-income housing near transit would be effective and 63% favored letting developers construct larger buildings along major commercial corridors, only 43% favored building apartments on single-family lots.

Public officials and nonprofit leaders said they were encouraged by the poll’s results and the apparent willingness to consider a wide range of solutions.

“It looks like there is support for higher-density zoning, mixed-income housing, which I was glad to see,” said Elise Buik, president and chief executive of United Way of Greater Los Angeles. “And so, that does make me optimistic versus when we started on this issue a decade ago. We couldn’t get anyone to focus on it.”

Nonetheless, no clear consensus emerged on how voters would balance an emergency response to homelessness with measures that would take longer but provide permanent solutions.

Marfoglia leaned toward short-term services. “They can be housed immediately off the street while at the same time they’re being rehabilitated,” he said. “Whatever aspect that requires, [whether] mental health issues, job training, etc.”

But Andrea Kidd, a homemaker and another participant in the focus group, said a quick fix was “just gonna keep bringing the problem back and back and cost us more money when it’s better to get a longtime solution.”

The poll uncovered similar wavering. Asked whether existing funds would best be spent on building “short-term shelters to get people off the streets” or “long-term housing for the homeless, even though that takes longer,” respondents were evenly split, with 39% favoring each strategy and 13% saying both.

But they were divided 59% for long-term policies and 23% for short-term policies when the question was rephrased, comparing solutions that are “faster and cost less initially, but there are yearly fixed costs,” with those that “take much longer and cost more up front, but hold out the hope of a permanent solution that might save money in the long run.”

That lopsided response was similar to a 2018 poll of Los Angeles County voters by United Way, in which 56% said they would support solutions that “address root causes” versus 31% who favored “reducing the number of people visibly living on the streets as soon as possible.”

Buik said she sees that as an endorsement of her agency’s advocacy for permanent housing.

“Of course ‘temporary shelter’ sounds simpler than housing,” she said. “But when the costs and time that it takes are not that much better than permanent housing, our focus is on housing because that’s what will truly break the cycle.”

In November 2016, Los Angeles city voters approved Proposition HHH, the $1.2-billion bond authorization to subsidize the construction of permanent housing for homeless people. Since then, all of those funds have been committed to projects that will produce thousands of units of homeless housing over the next few years. But in three years, none has been completed.

Garcetti attributed the cost increases for the projects to various causes, including the price of steel, a tight labor market and the devaluation of tax credit financing by the 2017 federal income tax reduction.

By next year, though, about 2,000 housing units now under construction are scheduled to open. A competition conducted by the mayor’s office produced plans for nearly 1,000 additional housing units that will cost less and be completed faster. And Garcetti said his “A Bridge Home” program, which has so far opened only three shelters, will add 23 more by July.

But the new money has little obvious impact. After a small dip in 2018, the annual homeless point-in-time count jumped 12% this year, estimating the population at nearly 60,000 countywide, with 44,000 living on the streets.

Supervisor Mark Ridley-Thomas said those numbers would have been even higher had it not been for Measure H. What’s needed now, he said, is to double the effort.

The strong backing for a right-to-shelter law provided qualified support for Sacramento Mayor Darrell Steinberg, who proposed such a law after his appointment by Gov. Gavin Newsom to lead the state’s new homelessness task force with Ridley-Thomas. But Steinberg quickly backed off that term after being criticized by advocates of permanent housing. He has since changed the wording to “right to housing,” distinguishing his idea from the New York model, which has been criticized for placing tens of thousands of people in massive shelters with few services or clear routes to permanent housing.

But poll respondents strongly favored a model that was defined to mean “the government is required to provide temporary shelter to any homeless person who wishes to come indoors.”

Steinberg said he sees that as support.

“We have a public policy that says it’s OK that people live outdoors,” he said. “And until we change that, our resources, our programs, our strategies are going to continue to be fragmented — helping many people along the way but not aim towards the most important objective, which is to, is to get people off our streets.”

Garcetti, who launched a program to build short-term shelters all around the city, defended his program as an alternative to New York’s model because it is service rich.

“If I had a $21-billion surplus, and I was the governor, here’s what I do with it,” Garcetti said. “I would say, ‘Absolutely, there’s a right to shelter.’”